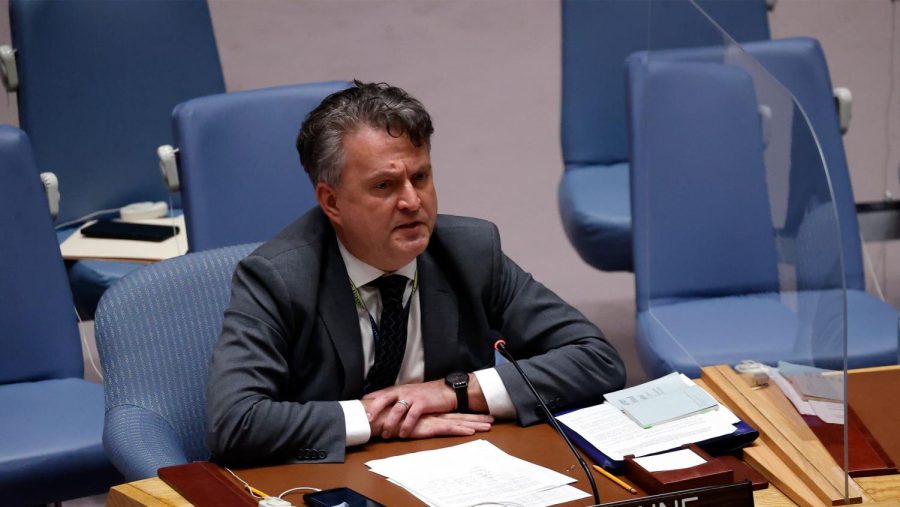 Photo courtesy of the NYTimes

Ukraine’s ambassador to the UN on March 2

Ukraine and Russia ended attempts at a diplomatic end to the conflict after a five hour long delegation on February 28.  After neither side yielded, the hope for a peaceful solution has dissolved.

March 1st’s UN assembly meeting saw over 100 diplomats leave the hall during a  pre-recorded speech by Russian Foreign Minister Sergei Lavrov. Diplomats who were involved in the boycott include those from the European Union, the United States, the United Kingdom and Japan.

The speech included the foreign minister claiming Ukraine was violating the human rights of Russo-Ukrainians in the East Ukranian Donbas region and the laws Ukraine is passing are similar to those of Nazi Germany. There is no evidence to support any of these claims.

The UN Assembly, during an emergency session on March 2, voted on the course of action following Russia’s invasion. In a 141-5 resolution, the assembly called for immediate withdrawal of Russian forces from Ukrainian territory, and a ceasefire. And while it is not legally required that Russia follows the resolution of the General Assembly, it puts pressure on it and its ally, Belarus.

Belarus is one of Russia’s most significant allies in both politics and economics. Its land is open to use by Russia to store nuclear weapons, and Belarusian troops could be used alongside the Russian army as of February 25th.

As reported by ABC News, Cuban ambassador Pedro Luis Cuesta blamed “U.S. determination to keep expanding NATO towards Russia’s borders,” for Russia’s invasion of Ukraine. Cuesta abstained from voting during the March 2 UN meeting, along with 34 other countries.

The only four countries who voted in support of Russia in the March 2’s assembly were Belarus, North Korea, Eritrea, and Syria. China, Russia’s ally, abstained from voting, as did India, Iraq, and Iran.

Belarus’s President, Alexander Lukashenko, has garnered criticism from both his people and other nations for providing Putin aid. India’s abstaining comes as a shock, as Russia has supported India on several issues and has provided them with military equipment.

President Biden has expressed the intention to continue supporting Ukraine.  However, Russia has warned that American or NATO interference in Ukraine would be crossing a “red line.”

The leaders of the “Group of Seven” (U.S.A, Canada, E.U, France, U.K, Italy and Japan) have agreed to stagnate Russia’s economy by cutting off their access to American banks and any asset or investment it has in America. The intention is to disable Russian forces both internally and in Ukraine.

A map of impacted areas of Ukraine