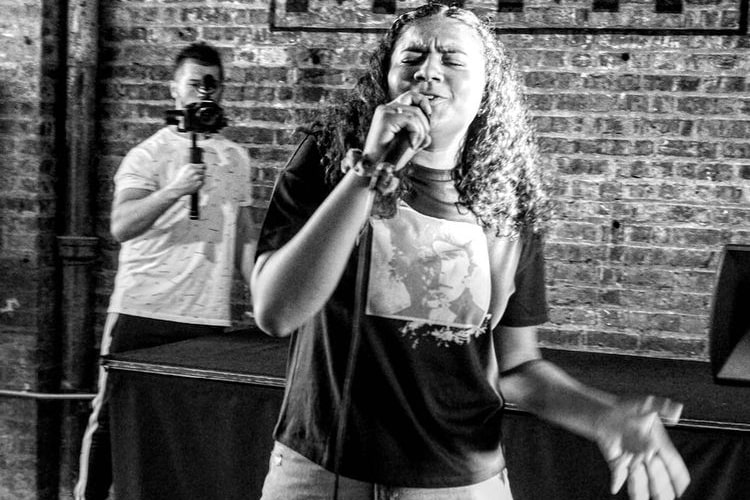 Champion performing in 2019 following her success in the “Burlington Idol” competition. “Still got a lot to work on, but I’m proud of myself,” she said. (Photo courtesy of Instagram)

Champion performing in 2019 following her success in the “Burlington Idol” competition. “Still got a lot to work on, but I’m proud of myself,” she said.

“Everything is positive and motivated by love”: RV student Camryn Champion’s journey to “American Idol”

Imagine having Grammy-award winning pop icon Katie Perry give you on-the-spot feedback as you belt out your song with as much heart as you can muster for an audience of millions.

This was the experience of RV junior and Lumberton native Camryn Champion, who recently gained fame through her appearance on “American Idol,” a reality television show in which aspiring singers compete for fame in the music industry and to fulfill lifelong dreams.

Champion, a full-time student, athlete and singer, has been all over the news in recent weeks. On the February 27 show, she won the much sought-after “golden ticket” to Hollywood, meaning she advanced in the “Idol” competition.

Champion’s life has always revolved around music, and she claims she began singing when she was two years old.

“I started doing national anthems [when I was eight years old], and my first one was for a monster truck show in Los Angeles,” she said. “There were about 2,000 people there, and it was my first big show, and it made me realize that I liked to perform.”

Champion was born in 2005 and spent her youngest years in Okinawa, Japan, because of her father’s military deployment. She also spent time living in New York and California, and she and her family returned to New Jersey in 2015.

“Everywhere I’ve moved, I’ve always found something I could do with music, which is cool,” Champion told the Burlington County Times on March 9. “It’s always different, but it has definitely shaped me into who I am.”

For her audition on “Idol,” Champion sang Sam Smith’s “I’m Not the Only One,” and was told by judge Lionel Ritchie that she could “polish it up and make it sharper,” and that she ultimately deserved a spot in Hollywood. On her website, you can find professionally-made videos of Champion belting out Andra Day’s “I Rise Up.” While it’s still growing, her smooth and soulful voice makes her an ideal singer of soul or even the blues.

“I’ll listen to almost anything,” she said. “but R&B is my favorite genre, and Adele is one of my favorite artists.”

Champion’s journey to “American Idol” was not as clear-cut as the show would make it appear.

“I actually did not choose ‘American Idol’ over ‘America’s Got Talent’ or anything like that,” explained Champion.

In 2018, Champion was a contestant on a show called “Coast 2 Coast,” showcase of artists in big cities across the country, and she ended up winning first place.

“It was broadcast everywhere, and one of the talent scouts reached out to my mom and asked if I wanted to audition [for “American Idol”],” said Champion.

Champion traveled to Nashville with her mother in early November. The auditions actually require “pre-audition” videos before the in-person audition.

At the time of taping the audition which aired, Champion was not as nervous as she had anticipated, but she was still anxious about the enormity of such a significant opportunity in her career.

“On screen, you appear to be so far away from them, but in person, you’re so close to them and all up in their face,” Champion said.

After she finished singing, Champion received feedback from the judges. A contestant only needs two of the three judges to say yes in order to move on to the next round.

“I was lucky enough to get three,” Champion said.

Champion, whose mother is from Trinidad, has long curly hair that she often wears loose when performing. During her audition on “Idol,” Perry stopped her halfway through her song and told her that she was “still reserved,” then encouraged her to “get it out.” In the next cut, Champion takes the song again, this time singing from her gut, and her strength and depth are measured but clear. She gives Smith’s lyrics some power and rawness that sends her to the next round.

“The experience was surreal,” Champion says of her time auditioning. “It was crazy getting to experience this new place and meeting all these new people. The judges in general were super nice…when we were not filming, I got to talk to them like regular people, and they were so supportive. You always see celebrities on social media and don’t know if they are really nice, but I could tell all three of [the judges] really wanted me to succeed.”

In early December, Champion flew out to Hollywood to film the next round of competition for “American Idol.” However, the taped audition — which would launch her into fame — would not air until February 2022.

“I had to keep the news hidden for a long time,” she said. “But now that the show is out, people are saying things to me everywhere I go, which is ironic given that nothing significant has occurred and yet so much has changed. People will approach me in public and ask, ‘Are you Camryn?’ and exclaim, ‘Oh my gosh!’”

While the newfound fame has been somewhat difficult to juggle amid school and family responsibilities, Champion still finds time to pursue her other passion: songwriting. While in California, Champion was even approached by other talent agents and industry personnel about selling some of the songs she has written. She takes the extra attention in stride and notes that “everything is positive and motivated by love.”

Her mother, Melissa Champion, is a big source of that positive motivation. Champion traveled to Nashville and California with her mother by her side, and Mrs. Champion has transformed into a talent agent overnight.

“My mom has always been and continues to be my inspiration,” Champion said. “She is so supportive and has always encouraged me, both on and off the show.”

Her peers and members of the RV community — including English teacher Mr. Burns, one her biggest fans, and principal Martin — have shown up and showed out for Champion’s success.

“I walked in my classroom the day after the show aired and everyone started clapping,” she said. “And throughout the day, everybody was so loving.”

As “American Idol” wraps up its nationwide auditions, Champion is looking beyond the show. With plans to continue writing and performing, she is looking at performing arts programs in college, and even more singing competitions to get her name out there.

“Right now, I’m hoping to pursue anything in music,” she said. “After the show, I’m thinking about auditioning for ‘The Voice.’”