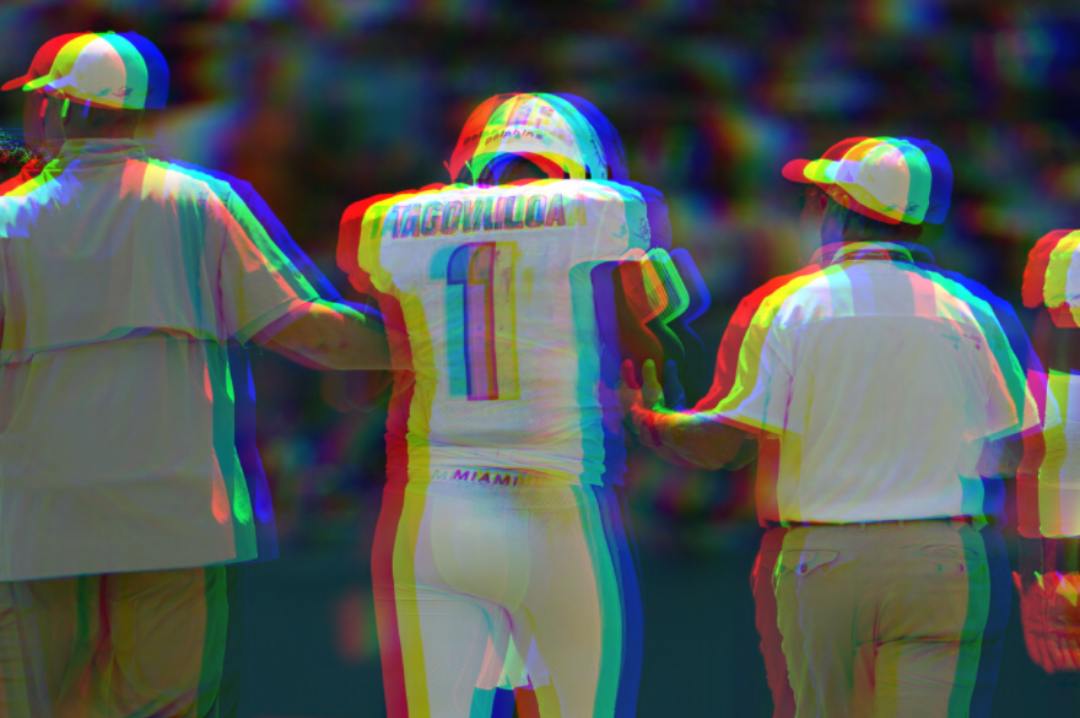 Tua’s concussion last month was his second, and many neuroscientists are questioning the long-term damage his return to play could lead to (Photo courtesy of Hawaiian Public Radio (illustration via Canva))

Tua’s concussion last month was his second, and many neuroscientists are questioning the long-term damage his return to play could lead to

After losing a sixth of his NFL season to a concussion, Miami Dolphins Quarterback Tua Tagovailoa returned to the field last Sunday in their game against the Pittsburgh Steelers, and will play against the Detroit Lions this Sunday.

On September 29, fans across the nation watched on live television as Tagovailoa’s head slammed onto the ground and his fingers curled sickly backwards—but this wasn’t the first time he’d lost control of his muscles that week. Only four days earlier, Tagovaila had stumbled mid-game after a sack, but was cleared at halftime after falsely diagnosing him with a pre-existing back injury, not a concussion.

This called into question the NFL’s entire protocol on concussions: was it negligence by staff members, or the player himself that allowed his premature return?

The pre-existing protocol—how did Tagovailoa get cleared?

According to NPR, every NFL game has three unaffiliated neurotrauma consultants who work in tandem with team physicians to diagnose and treat concussions. The protocol mandates that any player who exhibits signs of concussion symptoms must be removed from the game so a more thorough evaluation can be conducted by the medical team.

In Tagovailoa’s case, his first symptom came in the September 24 game against the Buffalo Bills. Despite stumbling after hitting his head on the ground, one physician cleared him to return to play. The stumbling was written off as a back injury from a previous game, but something was wrong. For years, the league’s protocol has recognized lack of balance as one of the signs of a concussion. It was far more likely that his stumble would be a result of the sudden head injury rather than the pre-existing problem with his back. The NFL Players Association must agree too—or maybe they just want to cover their a**es: the consultant who cleared Tagovailoa was fired, a necessary response to the amounting outrage by fans everywhere.

Dr. Chris Nowinski, an American neuroscientist and author who extensively researched concussions in football, tweeted the day of Tagovailoa’s game-stopping injury: “If Tua takes the field tonight, it’s a massive step back for #concussion care in the NFL. If he has a 2nd concussion that destroys his season or career, everyone involved will be sued & should lose their jobs, coaches included. We all saw it, even they must know this isn’t right.”

His tweet accurately foreshadowed the events of the night, between Taugovaila’s concussion to the firing of the consultant they held responsible. The problem is that while neuroscientists like him protested against the decisions being made, nothing was being done on the inside of the NFL. It shouldn’t have taken a career-threatening injury to bring reform to the NFL protocol.

“Whatever changes need to be made to the protocol that don’t allow that to happen in the future is a necessary change for sure,” James McHugh, an Athletic Trainer at RV, said.

When Tagovailoa’s hands flexed backwards, it was caused by the same condition that made him stumble just four nights before: ataxia.

Ataxia can cause “poor muscle control that causes clumsy voluntary movements. It may cause difficulty with walking and balance, hand coordination, speech and swallowing, and eye movements,” according to  The Mayo Clinic. “Ataxia usually results from damage to the part of the brain that controls muscle coordination (cerebellum) or its connections.”

In Tagovaila’s case, the damage to his cerebellum comes directly from the head injuries he has sustained playing in the NFL. While most concussion symptoms are unable to be seen to outsiders, the ataxia Tajovaila suffered served as a physical symbol of the accumulating damage athletes suffer from head trauma. Medical personnel take on the responsibility of going through protocol properly with the athlete, but ultimately the athlete plays their own role too.

“I don’t necessarily think it’s the coaches or the doctors,” McHugh said. “It’s important for the players to be honest about their symptoms. A lot of the times you see players not really being entirely honest or truthful about how they’re feeling and that changes the way that doctors can evaluate them, especially for a concussion. That’s not something that is a visible injury. You [have to do] a lot of evaluation on how the player or the patient is telling you how they feel [and you] have to be able to trust what the player is telling you.”

It’s important for the players to be honest about their symptoms. A lot of the times you see players not really being entirely honest or truthful about how they’re feeling and that changes the way that doctors can evaluate them, especially for a concussion. That’s not something that is a visible injury.”

“As an athlete you always want to play through the pain and deal with it on your own, but when it has come to having concussions it’s hard to hide it,” Zach Boland, a senior football player at RV, said. “[With] what we’ve seen with Tua going down it becomes a big responsibility to be honest through the whole process because other injuries can heal but concussions will always have an effect on you.”

What risks did Tagovaila face in being cleared?

Like Tagovailoa, Boland has had multiple concussions directly from football and knows the first-hand effects of a concussion.

“Tua going back in to play the next week was more on the training staff than it was on Tua,” Boland said. “They are specialists in treating athletes and he was showing signs of severe head trauma like stumbling right after he got up from a big hit. Then going through the tests and protocols of getting back to play takes longer than 4 days. It at least takes one and half to two weeks for a minor concussion or head injury so even if Tua wasn’t being honest to play the athletic trainers should have kept him out longer than the four days from him going out on that Sunday and then him playing that Thursday night.”

In a high-contact sport like football, it is better to play it safe—returning back to a sport too early can lead players to develop post-concussive syndrome. According to The Athletic,  “[symptoms] include headaches, disturbances to balance, vision problems and mood changes — from mild irritability and being more anger-prone to serious anxiety or depression.”

Worse, concussions can even be fatal, which is why football players can’t play anymore after a certain degree of head trauma. Tagovailoa is only a rookie, and unless he wants to go into an early retirement, he needs to take all necessary rest time.

How did the NFL respond?

In the heat of the publicity thrown on them, the NFL established a new protocol:  according to the NFL, “the diagnosis of “ataxia” has been added to the mandatory “no-go” symptoms that determine whether or not a player re-enters a game.”

The new protocol will prevent medical staff from overlooking possible concussion symptoms so that players can be properly diagnosed. If this protocol had been in place for Tagovailoa, he would not have been put in the game so soon after stumbling—a clear indication of a deeper injury.

“That’s why it’s so important to follow the protocol and deal with it the right way from the very beginning so that you’re not putting anyone at risk for any further long term damage,” McHugh says.

With Tagovailoa coming back for his second game this Sunday, fans everywhere will be watching to see how he fares. Against the Steelers last weekend, many analysts pointed to the fact that he looked rusty on the field, and any time he scrambled, everyone seemed to hold their breaths. This Sunday’s game will help answer the question, is it still too soon, or is the NFL’s newly conservative approach enough this time?

Going forward, the new protocol needs to be followed.

“It just shows the importance and the seriousness of head injuries and concussion,” McHugh says. “It’s a good message for anybody involved in athletics, whether it be coaches, players, parents, to not pressure or rush anyone back from a head injury before they have been fully evaluated and cleared by the proper medical professional. There’s plenty of times where students, whether it be college level or even at the high school level, may feel pressure from some outside sources to return before they’re ready, but it’s really important to just make sure that all of the proper protocols are followed before returning anybody back to play after a head injury.”

Your donation will support the student journalists of Rancocas Valley Regional High School. Your contribution will allow us to purchase equipment and cover our annual website hosting costs.

Donate to The Holly Spirit
$30
$500
Contributed
Our Goal
Submitting donation...

Thank you for your donation!