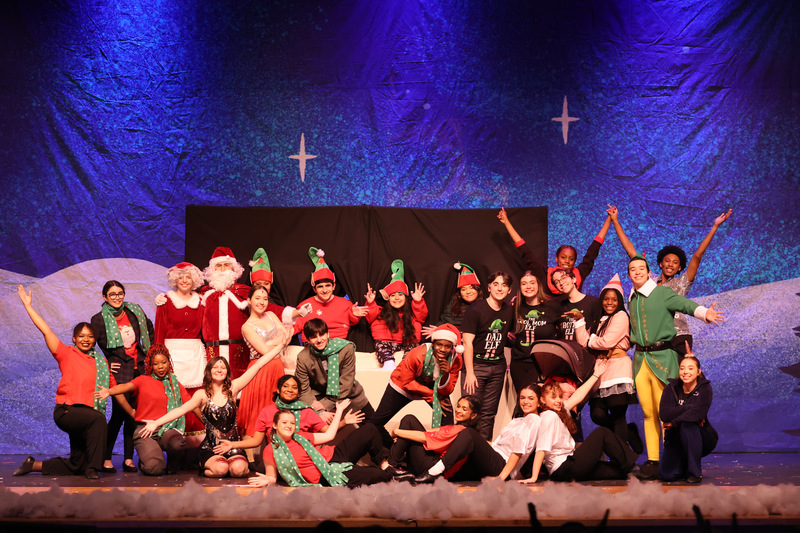 The cast of this year’s musical, “Elf”

Red Devil Dramatics give a stellar holiday performance in “Elf” 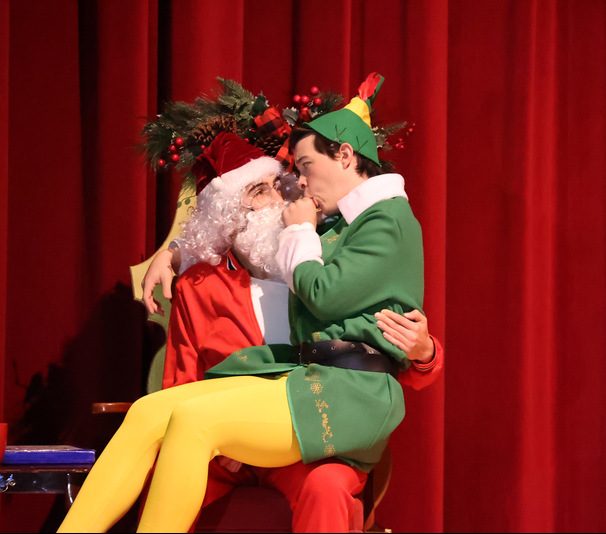 Jokes for adults and Santa in a tracksuit: “Elf” entertains all ages

RV debuted its highly anticipated winter musical, and in theme with the festive season, the RV Dramatics program put on a production of “Elf: The Musical.”

The story follows Buddy the Elf as he navigates through life after finding out the shocking truth, that he isn’t an elf but a human. The chaotic goose chase for Buddy to find his true family leads him on an adventure filled with Christmas joy, love and most importantly singing. The happy elf sings an array of jolly-filled songs getting the audience in a Christmas mood.

The musical wasn’t just filled with jolly and happiness, but very emotionally packed scenes as well. When Ford center stage belted out the ending to “Never Fall in Love With an Elf” the emotions encapsulated by her voice moved the audience, showcased by the raging applause in the theater.

Senior Kevin Turkheimer, who played Santa in the show, said his favorite musical number is “the opening number because it sets the tone for the entire show, and it’s [his] first song.” There is nothing better than seeing Santa sing around the stage in a tracksuit to set the tone of the musical.

I believe that “Elf” was a fun musical to watch.  It had a more whimsical aspect compared to recent musicals done by including but not limited to “Pippin,” “The Addams Family” and “Chicago” but that did not take away from the watching experience but rather added to it.

Senior Joelle Darrah, who played Emily Hobbs, stated, “I couldn’t imagine doing a more fun show and especially with the people I love, it’s a good way to end off my musical career.”

The settled adult geared jokes in the musical make up for the more playful tone of the story. Along with the funny lines, the visuals were amazing. The snow scene in the musicals filled everyone’s eyes in the theater with joy. It was beyond magical.

I asked chemistry teacher and the show’s producer, Evan Synder (who is also an RV alum) to give his opinion on his unique viewing standpoint on Elf, comparing the musical to ones done in RV not so distant past.

“Well, it was definitely a different experience considering I was on the production side for ‘Elf,’” he said. “When I was a student here I was an actor, but I loved being behind the scenes running the show making sure everything was in order, and my experience with red devil dramatics as a whole is always incredible.”

To the surprise of no one, the Red Devil Dramatics Department is still killing it after all these years.

The production of “Elf” was a good choice for the musical this year. Taking a story that most know and putting it to the stage with fun songs, and stunning visuals was brilliant on the producer’s part.  The actors were incredible in their acting, dancing, and singing.  They were able to convey so much emotion through a silly story.  The stage crew behind the scenes also deserves so much recognition along with the student-performed pit members. Overall “Elf” was amazing this year, and I can not wait to see what Red Devil Dramatics has in store for us next year. 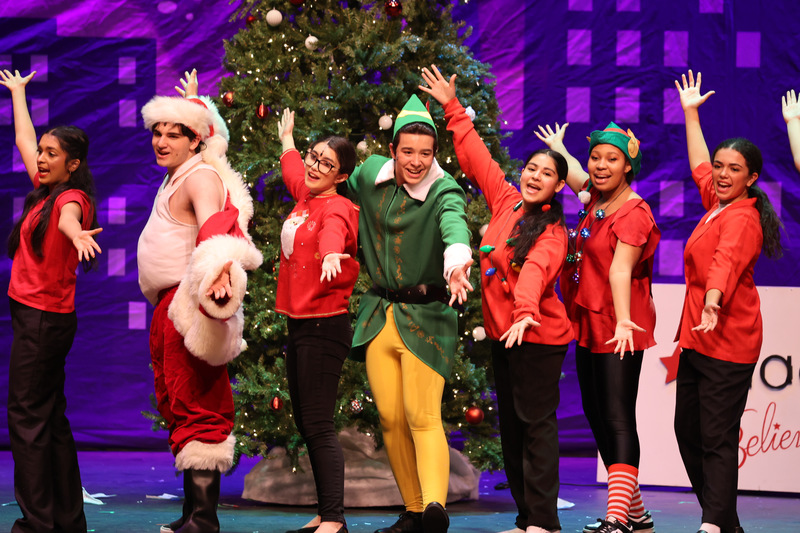 Holmes and the cast of “Elf”

RV’s “Elf” is whimsical and loaded with talent

The Cappies is a writing and awards program that trains high school theatre and journalism students to be expert writers, critical thinkers, and leaders. Student critics vie to be published in local media outlets by attending productions at other schools and writing critical reviews.

The following Cappies review was completed by William Pedrick of Clayton High School.

As the Christmas season arrives, you’d have to be a cotton-headed ninnymuggins not to see Rancocas Valley High School’s production of “Elf: the Musical”!

The 2003 Christmas classic, “Elf,” starring Will Ferrell as the title character, was adapted into a Broadway musical in 2010. With the score by Matthew Sklar and Chad Beguelin and the book adapted from the film by Bob Martin and Thomas Meehan, “Elf the Musical” was later on tour in 2012 and on the West End in 2015. The show follows the whimsical and joyous Buddy the Elf who lives in the North Pole until he realizes . . . he’s a human! Buddy ventures off to New York to meet his real father. However, his father, Walter Hobbs, does not share Buddy’s love of Christmas. Buddy tries to connect with his father, meet his new family, ask out the most beautiful girl, and spread Christmas cheer all the way through.

RV’s production of “Elf “has been in the works since 2020. The show brought everyone into a Christmas spirit, right in time for the holidays. While all of the songs were memorable, “Nobody Cares About Santa Claus” was a favorite. The fake Santas really brought up the energy for the start of Act II, and it carried throughout the rest of the show. Overall, it was an amazing show.

And speaking of energy, Buddy (senior Aidan Holmes) was full of energy, whimsy and a delightful silliness through it all. Having the most stage time and plenty of musical numbers can visibly tire some actors out, but this was not the case for Holmes! And while Jovie (Elizabeth Ford) didn’t have as many numbers, her exceptional voice made up for it quite enough.

The supporting cast and ensemble had their memorable moments too. Walter Hobbs (James Humphreys) was a phenomenal contrast to Buddy’s joy. Emily (Joelle Darragh) and Michael Hobbs (JT Mozes) harmonized well in their numbers. The manager of Macy’s (Rosalena Garcia), while only in a few scenes, was very memorable in her role. The humorous Santa Claus (Kevin Turkheimer) was a great narrator with clever quips to go with. The ensemble was mostly in sync and was full of life in its background acting. With that in mind, the whole cast was enjoyable to watch.

The technical aspects of Elf really brought the show together. Each of the intricate sets were built by the students. Some of the sets included an elevator with functioning doors and an iceberg that melted as Buddy arrived in New York. The lighting was immaculate and added so much to the production. The crew was mostly on point, with smooth scene changes and relative invisibility. The costumes were bright and colorful and complimented the elves wonderfully.

As one can see, Elf was a fun, festive show that excelled at bringing Christmas spirit. To quote Buddy, “The best way to spread Christmas cheer is singing loud for all to hear!”